Utah State University, located in the Northern Utah Mountains, is known for its top-notch academics and research and nationally recognized for its athletics.  In August 2016, Utah State’s Division 1 Aggies return to their newly renovated and renamed football stadium for the start of the 2016 season.

While the fans, students, staff, and public celebrate the premium enhancements and state-of-the-art upgrades, they will also appreciate the safety improvements incorporated into the renovation.  The kind of improvements most people never see or notice, but are critical to ensure the safety and protection of both lives and property.

AGF Manufacturing is proud to announce that our COLLECTanDRAIN® Model 5400 Auxiliary Drains are part of the Maverik Stadium Renovation. 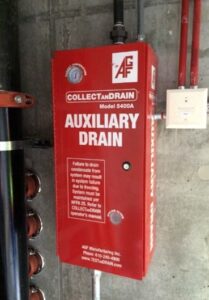 The Model 5400 goes beyond our patented prevention features that protect fire sprinkler systems from being tripped by improper maintenance or vandalism.  The Model 5400 provides a temperature-controlled environment that deters system failures caused by freezing condensation in dry pipe system auxiliary drains. The heated and insulated cabinet contains an auxiliary drain with a float switch to monitor condensation levels.  When condensation reaches a level where maintenance is needed, the float switch activates an audible alarm and LED warning light that make freeze-ups a thing of the past.  It also features fire control panel notification capabilities.

Dry Fire Sprinkler System Auxiliary Drains can cost $5,000 to $10,000 or more every time they fail.  Every year building owners spend thousands of dollars from their operating budget replacing auxiliary drains that collect water, freeze and break. 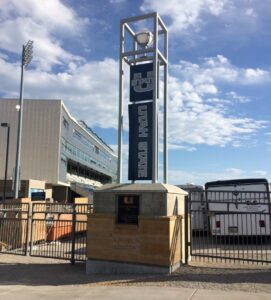 John Blankman, President of Paradise Fire Protection, learned about AGF and the M5400 at an AFSA (American Fire Sprinkler Association) Trade Show in Phoenix.  Frustrated with standard auxiliary drains that freeze and break, John was looking for a more reliable product that would prevent freezing.  John was impressed with the M5400’s heated cabinet, and stated, “The 5400 would ensure that they did not have failures at the new stadium.”

AGF is the designer and manufacturer of the most reliable and versatile line of Inspector’s Test and Drain Valves, Auxiliary Drains, Corrosion Monitors, and Accessories in the Fire Sprinkler Industry. AGF revolutionized the fire sprinkler industry with the Model 1000 TESTanDRAIN® single valve inspector’s test which eliminated the time and space-consuming traditional loop assembly.  Since then, TESTanDRAIN® valves have been installed in countless systems throughout the world.

Over the years, AGF has introduced a number of unique products, including anti-trip drum drips and corrosion monitors, that accommodate the varying demands of the fire protection industry and help manage fire safety systems more efficiently, resulting in more reliable systems that save resources.

Originally printed in the September 2016 edition of Fire Protection Contractor.