The winter of 2012/2013 was still a painful memory for U-Haul Moving and Storage of Hanover in Massachusetts when they started experiencing similar system break downs due to freeze-ups at the beginning of this past winter. Rather than calling contractors back multiple times to fix the same “problem child” auxiliary drains, they decided to be proactive.

They reached out to New England Safety Systems (NESS), a fire alarm specialist in Taunton, and their partner, Rustic Fire Protection Inc., in Norton, to perform a system inspection and make recommendations to end the damaging and expensive cycle of break downs.

A System with Problematic Auxiliary Drains

U-Haul Moving and Storage of Hanover is located at 49 Franks Lane and is a full-service facility that offers secure 24-hour accessible self-storage. This location has two buildings totaling 96,188 square feet with over 500 storage units ranging in sizes from 5’x5’ to 10’x30’. The upper level of each building house smaller, indoor accessed storage units and the ground levels contain larger drive up storage units.

Each floor has its own dry system. The piping layout of the four systems requires a total of 17 auxiliary drains. In the storage business, every square foot of space represents revenue, and while the upper levels contained common walkway space that accommodates the required auxiliary drains, the lower levels do not. So, auxiliary drains were located inside rented storage units.  As a result, the lower level auxiliary drains were difficult to access and service, so when they fell victim to freeze-ups they caused significant damage to customer’s belongings and greatly increased U-Haul’s insurance premiums.   What U-Haul Moving and Storage of Hanover needed from NESS and Rustic were creative solutions.

System inspection revealed a number of pipe pitch problems that affected proper system draining.  While the pitch problems can be easily resolved by adjusting or adding pipe hangers, adjustments will not address the primary problems caused by the lower-level auxiliary drain’s inaccessibility.  Jason Burgess’ (Rustic’s project manager) solution to that problem was a new product by AGF Manufacturing Inc., the COLLECTanDRAIN Model 5400A. 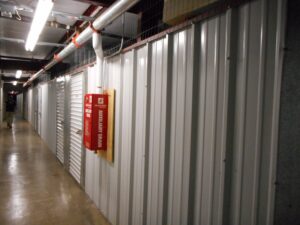 The COLLECTanDRAIN Model 5400A is an auxiliary drain housed in its own temperature-controlled environment. Each insulated and heated cabinet contains an NFPA 13 traditionally configured auxiliary drain with a float switch that monitors accumulating condensation levels and a visual and audible alarm that provides notification when the drain requires attention. 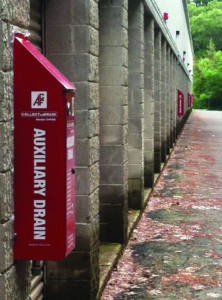 However, for Jason’s solution to work a modified cabinet that would accommodate the drain pipe entering through the back would be needed.

After a bit of brainstorming, the engineers at AGF instead proposed an outdoor cover for the cabinet—a “hat” with a sloped roof and ear flaps that would fit over the top of the standard Model 5400A cabinet. The sloped roof of the hat is designed to shed rain and snow while allowing the drain pipe to exit the building wall on a 45° angle and then enter the cabinet through the top.

Both the sloped roof and ear flaps contain extra insulation and the cabinets themselves were modified with additional insulation and magnetic door seals. The hat solution also proved to be less expensive and faster than creating custom cabinets. Plus, since they fit over the standard Model 5400 cabinet they allowed Rustic to get the project immediately underway while the hats were being made. 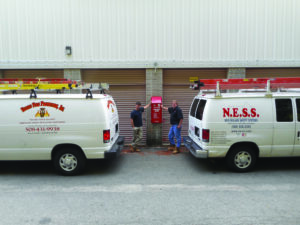 Rustic’s Journeyman Sprinkler Fitter Jon Gores began the project on May 8, 2014. His first step was to determine exactly where on the outside walls of the two buildings each of the new COLLECTanDRAIN cabinets would be located.

After the locations were marked out, Eastern Concrete Cutting of Easton was brought in to core drill holes at the required 45° angle. With the holes cored, Jon began the process of hanging the cabinets and connecting the drain pipes to the new auxiliary drains.  In keeping with Rustic’s usual attention to detail, Jon used stainless steel mounting hardware to prevent corrosion, filled the holes with fire-stop, and insulated the pipe leading from the mains to the new COLLECTanDRAINs.

As Rustic installed each COLLECTanDRAIN cabinet, NESS followed closely behind tying them into the new Firelite 9200 Series Fire Alarm Control Panel which would provide remote monitoring.  By the time all the cabinets were mounted, powered, and wired to the panel the custom hats were back from being powder coated and were ready for installation using stainless steel screws and silicon to seal wall gaps.

Going “In the Box” with Out of the Box Ideas

As a result of the out of the box, or more accurately “in the box,” thinking of New England Safety Systems, Rustic Fire Protection, and AGF Manufacturing the COLLECTanDRAIN Model 5400A proved to be the right product for a difficult job.  Now when the auxiliary drains are full, the Firelite 9200 will alert management to which drain needs attention, and no matter which drain it is they now will have access.  U-Haul Moving and Storage of Hanover, their customers, and their insurance provider will have less anxiety as cold weather approaches this fall because they know that their auxiliary drains are being closely monitored and protected.

The print version of this article originally appeared in the September 2014 issues of Fire Protection Contractor.